Posted on December 28, 2016 by Alastair Roberts

I enjoyed a wonderful and refreshing Christmas with my family and other friends this year. The last few days have been packed with lots of good food, renewed fellowship, board games, and country walks. I got to watch Rogue One with my brother, caught up on some reading, and gave myself ample reason to start a new diet in the New Year! 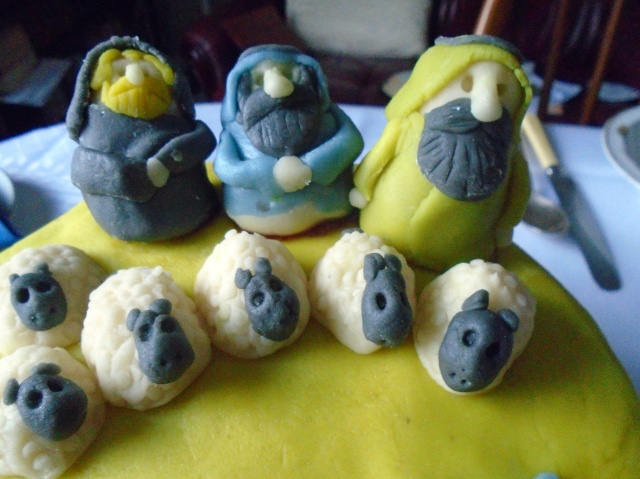 Detail from the Christmas cake I decorated this year

Once again, apart from a few bursts, 2016 wasn’t the most active year on this blog. Beyond podcasts and occasional links to posts elsewhere, I didn’t write very consistently here. Much of what I did write was concerned with the US election and its aftermath. Outside of this blog, however, I wrote fifty-nine guest posts or articles, including a few that have yet to come out. I participated in thirty-eight Mere Fidelity episodes. I now also have nine e-books available on my blog.

Considering that my primary interests lie elsewhere, I have written a surprising amount on politics over the last year. In addition to seventeen posts for Political Theology Today, I have written a dozen or so other major posts on events of this rather turbulent year in world politics. In particular, I have sought to explain the social dynamics that underlie the political phenomena we have been witnessing. In February, I asked whether Donald Trump’s support was really driven by racist xenophobia. In July, I reflected upon the moral vision of nationhood in light of Brexit, discussing the divides that the referendum result revealed.

My heaviest blogging period of the year occurred in the days surrounding the US election. Prior to the election, I posted on the social crisis of distrust and untruth in America and evangelicalism, pondered whether evangelical support for Trump should lead to our stepping back from the label, and encouraged potential Trump voters to reconsider their vote. Following the election, I wrote at length about some of the social factors that had given rise to Trump’s win: How Social Justice Ideology Gave Us Donald Trump, Further Thoughts: How Social Justice Ideology Fuels Racism and Sexism, A Crisis of Discourse—Part 1: Cracks in the Progressive Left, A Crisis of Discourse—Part 2: A Problem of Gender.

As in previous years, the subject of technology and its effect upon our society and discourse has been a matter of interest to me. In The De-condensation of Humanity, I discussed the ways in which technological developments may threaten our very notion of the human. In our podcast on Bible designs, we reflected upon the significance of the ‘technology’ of the modern Bible and how it has shaped and changed our understanding of and engagement with the Scriptures. In February, I had a long interview with Tony Reinke of Desiring God on the subject of social media and modern communications’ effect upon us: the first half of that interview has been posted here (the second half may appear at a later point next year). I also wrote a retrospective piece on Brave New World, eighty-five years on.

A couple of months ago, I uploaded an e-book on the subject of the rise of the first person storytelling as a mode of Christian discourse. I have also given thought to the importance of fighting for our institutions, looking back at John Stott’s stand against Martyn Lloyd-Jones and the collapse of the old American Protestantism to see what lessons we can learn for our current situation.

In addition to the post already mentioned in which I explored the gendered character of discourse, I have written on gender issues on a number of occasions over the course of the year. I wrote a piece on the strong female character trope for Mere Orthodoxy. I discussed the importance of taking natural gender differences seriously in our theological discourse on the subject of the sexes for The Calvinist International (with a follow-up piece here). I also wrote an essay on the vision of the sexes offered in Genesis in the latest edition of Primer.

Questions of scriptural hermeneutics have been prominent in my thinking at various points during the year. Two of my lengthier treatments of the subject of hermeneutics from the past year have since become e-books: Transfigured Hermeneutics and A Musical Case for Typological Realism. In October, I wrote on the subject of contextual theologies and their readings of Scripture in A Truth Above All Contexts: Daniel Kirk, Whiteness, and the Theological Interpretation of Scripture. In Hero’s Theme, I argued for the legitimacy and importance of figural reading of Scripture, employing the story of Rahab as an example. The relationship between biblical scholarship and dogmatic theology has also been a prominent issue in my continuing series on the eternal subordination of the Son debate: 1. The Debate So Far; 2. Survey of Some Relevant Material; 3. Subordination; 4. The Need for Trinitarian Clarity (Part 1); 5. The Need for Trinitarian Clarity (Part 2); 6. The Tension Between Bible and Doctrine; 7. Reconciling Scripture and Dogma; 8. κεφαλή in 1 Corinthians 11:3.

I have written a few posts on the biblical theology front. In addition to my series on a musical case for typological realism and my treatment of the Rahab story, I have written three further biblical theological pieces for the Theopolis Institute: The Falls of Man, The Levite, the Concubine, and Israel’s Story, and Exodus in 1 Kings. In a piece written for the most recent issue of Ad Fontes, I maintained that we can find an ecclesiology in nuce in Luke’s account of Pentecost, especially when read against the background of the Old Testament. I also reviewed Richard Hays’ superb new book, Echoes of Scripture in the Gospels, for Themelios.

Our first episode of Mere Fidelity was released over two and a half years ago and we are now within two episodes of our hundredth. I continue to be blessed by the company and conversation of Matt, Derek, and Andrew. A highlight from this past year for me was our five part book review of C.S. Lewis’ The Four Loves. However, once again, this year of Mere Fidelity has been marked by some fantastic guests. We discussed disability with my friend Kelby Carlson. We dove into the subject of Bible designs with J. Mark Bertrand. The irrepressible Karen Swallow Prior helped us to appreciate satire. We went full theology nerd with David Wilmington to explore the topic of apophatic theology. A couple of weeks ago we recorded our most popular episode yet, talking with Tim Keller about his new book, Making Sense of God.

Beyond the blog and the podcast, 2016 has been an incredibly busy, yet a productive and enjoyable one for me. I have had several speaking engagements and have largely completed two book projects for Crossway, a big book written alone, and a shorter book written with Andrew Wilson (watch this space!). I enjoyed a couple of wonderful holidays in the North of England with family and the opportunity to explore further in the area around Durham. I knit a blanket, a few scarves, and four cats. I also became a volunteer guide in my favourite building in the UK: Durham Cathedral. The following are a few pictures from the year.

With my brothers in the Dales

Pimms and pavlova on a summer’s day

Driving in the Dales

Alastair Roberts (PhD, Durham University) writes in the areas of biblical theology and ethics, but frequently trespasses beyond these bounds. He participates in the weekly Mere Fidelity podcast, blogs at Alastair’s Adversaria, and tweets at @zugzwanged.
View all posts by Alastair Roberts →
This entry was posted in Just for Fun, My Doings, Photos. Bookmark the permalink.

15 Responses to Retrospective on 2016