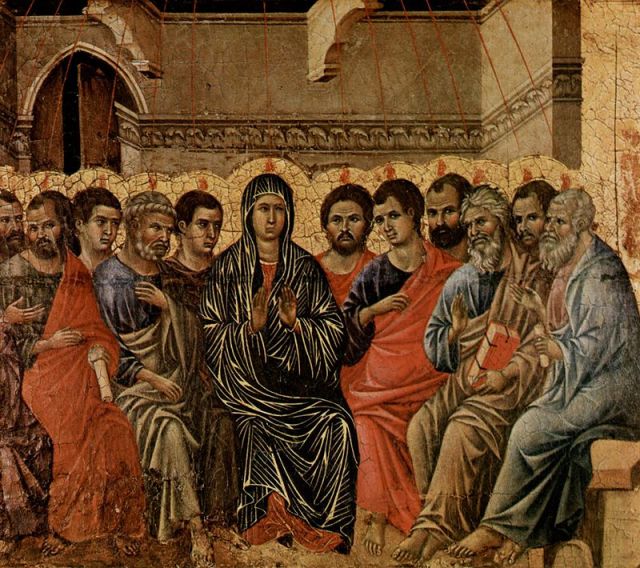 As it is Pentecost tomorrow, I took the time to correct a broken picture and some formatting problems in an old post on the subject: The Background of Pentecost. Within the post, I discuss several of the Old Testament narratives that provide background for the New Testament event of Pentecost. So, for instance:

As part of God’s construction of a new temple, God prepares new lamps. In the original created order, the sun, moon and stars were the lamps prepared by God on the fourth day. In the tabernacle the lamp provided light. In the nation of Israel, the political and religious leaders were seen as the anointed lightbearers. The prophets, empowered by the Spirit, were the anointing ones (Samuel and Elijah are both prominent examples of anointing prophets — 1 Samuel 10:1; 16:13; 1 Kings 19:15-16). It is important to notice one of the more obvious parallels between the lamp and ruler: both were the recipients of sacramental oil, a symbol of the Holy Spirit. The association of the imagery of lamps and rulers is seen in such places as Zechariah 4. It is also seen in such places as 1 Kings 11:36 and 15:4, where God promises that David will always have a ‘lamp before Me’, i.e. an heir on the throne.

In the gospels the lamp imagery is seen on a number of occasions. In Mark 4:21 Jesus points out that the lamp — it has the definite article in the Greek — does not come in order to be put under a basket or bed. Rather, the lamp comes in order to be publicly displayed. We should never forget that it is a parable (or riddle) of the kingdom that is being given here, not merely a timeless piece of moral advice for the individual believer. The lamp and light that is coming should be read in terms of the broader framework of redemptive history (e.g. Isaiah 60:1-3, 19-21). Christ and the new Israel that He is forming around Himself are to be the light of the world. The Church is to be a city set on a hill (a new Jerusalem — Isaiah 2:1-4). The lampstand giving light to the house (the language of the Sermon on the Mount) is quite probably temple imagery. We also see the lampstand imagery taken up in Revelation 1, where the lampstands represent the churches, with Christ, the great High Priest, tending them. The lampstand is also a symbolic burning bush. The burning bush of the Church is where man now meets with God. Wherever the Lampstand Church is, there is holy ground.

[Perhaps we should also read the lighting of the lampstand imagery against the background of the liturgical patterns of Exodus 29-30. The ascension offerings of 29:38ff would presumably have been followed by the lighting of the lamps and burning of the incense, which took place at the same time of the day (Exodus 30:7-8). The connection of ascension and lamp-lighting might help us to some degree in our understanding of the relationship between Ascension and Pentecost.]

When we hear of tongues of flame resting on the heads of the disciples at Pentecost we should instantly connect it with such biblical imagery. The disciples are being set up as new lightbearers. Being baptized by the Holy Spirit they are being placed in the heavenly places with Christ (cf. Ephesians 2:6) to shine as stars.

This is just a taster: there is lots, lots more in the post.

In another five part series, I discuss the manner in which the events of the day of Pentecost establishes the Church as a prophet:

The two most important prophetic succession narratives of the OT involve the transition from the leadership of Moses to the leadership of Joshua (Numbers 27:12-23) and the transition from the prophetic ministry of Elijah to that of Elisha (2 Kings 2:1-15). In both of these cases the mission started by the first prophet is completed by his successor. Moses’ mission to lead the children of Israel out of Egypt and into the Promised Land is only fulfilled in the ministry of his successor Joshua. Similarly, the mission that Elijah is charged with in 1 Kings 19:15-17 is only completed in the ministry of Elisha (2 Kings 8:13; 9:1-3).

Elisha is a new Elijah (2 Kings 2:15), just as Joshua is a new Moses (Numbers 27:20; Joshua 1:5). The parallel between the ministries of Joshua and Elisha and the ministry of Jesus’ disciples is worth highlighting. Both Joshua and Elisha serve as apprentices to prophets, whose ministries they inherit following the time of their masters’ departures. The same pattern holds in the case of Jesus’ disciples: having left their work to follow Jesus as disciples, they receive their master’s Spirit following his departure and continue his mission.

The relationship between the prophet and his apprentice is akin to the relationship between a father and his son. In Numbers 13:16 we see that Joshua’s name was given to him by Moses. Moses also lays his hands on Joshua (Deuteronomy 34:9) in a manner reminiscent of the patriarchs’ blessings on their sons (Genesis 48:13-20). A similar relationship exists between Elijah and Elisha. Elisha receives a ‘double portion’ of Elijah’s spirit, the inheritance appropriate to the firstborn (Deuteronomy 21:17), and, as Elijah is taken into heaven, Elisha addresses him as his ‘father’. Jesus’ farewell discourse and blessing of his disciples (Luke 24:51) belongs within this pattern of prophetic succession.

Zwiep notes the parallel between the stress on the visibility of the master’s departure in both the account of Elijah’s rapture and that of Jesus’ ascension. Seeing Elijah taken up was an indispensable condition for Elisha’s right to succeed him. Moberly explains the logic of the test: ‘…it is the responsibility of the prophet to be able to see God, and if Elisha cannot see God in this critical instance, then he is not able to take on the role of one who sees God in other instances; Elisha cannot be a prophet like Elijah unless he has the requisite spiritual capacity.’ The Lukan stress on the disciples’ witnessing of Jesus’ ascension might serve to underline their suitability for prophetic office.

Elijah and Moses typology is multilayered within the Lukan literature. However, in the critical movement in the narrative with which we are concerned, the disciples are typologically related to Joshua and Elisha. As their master departs, they will inherit his Spirit and continue his mission. The Spirit that the disciples will receive is the Spirit of Christ, the Spirit that supervised and empowered his own mission.

Finally, I posted on the subject of Pentecost earlier this week, over on the Political Theology blog:

Pentecost is a unification of the separated families of humanity. This unification isn’t accomplished through the will and power of empires and their rulers, but through the sending of the Spirit of Christ, poured out like life-giving rain on the drought-ridden earth. In place of only one holy—Hebrew—tongue, the wonderful works of God are spoken in the languages and dialects of many peoples. The multitude of languages is preserved—a sign of the goodness of human diversity—and human unity is achieved, not in the dominance of a single human empire, or in the collapsing of cultural difference, but in the joyful worship of God.

Alastair Roberts (PhD, Durham University) writes in the areas of biblical theology and ethics, but frequently trespasses beyond these bounds. He participates in the weekly Mere Fidelity podcast, blogs at Alastair’s Adversaria, and tweets at @zugzwanged.
View all posts by Alastair Roberts →
This entry was posted in #Luke2Acts, Acts, Bible, NT, NT Theology, The Church, Theological, Theology. Bookmark the permalink.