New Booklet: How Did We Get Here?

Posted on December 4, 2018 by Alastair Roberts 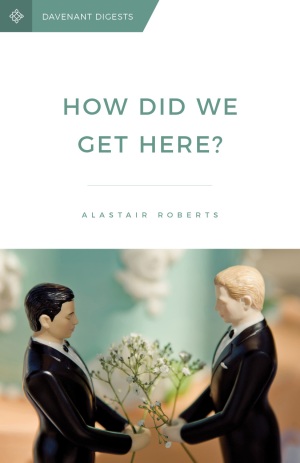 The Davenant Institute has just published a new Davenant Digest by me, on the subject of the causes for our current sexual landscape. You can get a free online copy by subscribing to the Davenant email list or you can buy a print copy here.

The romantic tradition of the West has been widely characterized by a narrow focus upon a love disentangled from all external ends, necessities, persons, sociality, history, laws, constraints, and duties—indeed, romantic love has often been accentuated precisely by pitting it against all such things. It should not surprise us that the movement for same-sex marriage has trafficked heavily upon the conformity of same-sex couples to our ideals of the purity of romantic love. In campaigns for same-sex marriage, marriage has been fairly consistently presented as a form of lifestyle choice for individuals, rather than as a social institution with norms and duties to which everyone must submit themselves. While such social norms and constraints have found much of their rationale in the natural ordering of the sexual union of man and woman to a greater telos than the couple’s private ends, without such a complicating natural end, same-sex unions can represent the liberal ideal of releasing marriage from external social norms and the championing of chosen bespoke models of marriage.

The connection of marriage with a vision of self-realization and expression ought to be appreciated here too. For our culture, marriage can be focused upon self-realization, social status, and its ideals of high levels of consumption. The extravagant and romantic wedding, in which a couple gush aspirational sentiments at each other, surrounded with tasteful expressions of their families’ wealth and social status, has become the most prominent symbol of marriage. Once again, same-sex couples can conform far more effectively to our cultural visions of marriage as the idealized state of the consumer than many male and female couples can, not least because children more readily represent extensions of the logic of same-sex couples’ consumption than constraints upon it.

Get a copy to read the whole thing here.

Alastair Roberts (PhD, Durham University) writes in the areas of biblical theology and ethics, but frequently trespasses beyond these bounds. He participates in the weekly Mere Fidelity podcast, blogs at Alastair’s Adversaria, and tweets at @zugzwanged.
View all posts by Alastair Roberts →
This entry was posted in Controversies, Culture, Davenant Institute, Ethics, My Books, Sex and Sexuality, Society, Technology, Theological. Bookmark the permalink.

1 Response to New Booklet: How Did We Get Here?