Posted on September 12, 2016 by Alastair Roberts

Grove Books publish a range of booklets on subjects relating to Christian theology and ministry. Each booklet offers an accessible and concise (typically under 30 pages), yet stimulating and informed treatment of its particular topic. Over the last few decades many renowned scholars have written booklets in Grove’s series. In my own library I have a score or more Grove booklets, with authors including N.T. Wright, Rowan Williams, Oliver O’Donovan, Walter Moberly, John Barclay, and Paul Bradshaw.

Grove Books have also produced scholarly treatments of many unusual topics that are only tackled in an occasional manner in other works, if at all. As such, they have plugged key holes in the more general literature, particularly for readers who don’t have access to many academic journals. I have Grove booklets on subjects such as ancient fonts, infant communion (two of them), early Eastern initiation rites, liturgy and technology, and the ritual kiss.

A few months ago, Ian Paul, the managing editor of Grove Books and the author of the superb blog, Psephizo (which you should be following), sent me a copy of one of his recent booklets, entitled Evangelical Leadership: Challenges and Opportunities. The following is a review and interaction. 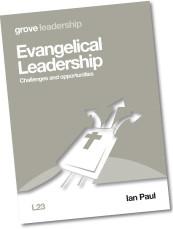 Evangelical Leadership is 28 pages in length and divided into five brief chapters, entitled ‘Being a Leader’, ‘Being Evangelical’, ‘Being Missional’, ‘Being Biblical’, and ‘Being Engaged’. Each chapter provides a short but rich overview of some themes relevant to its topic and concludes with a series of questions for reflection. It is the sort of book that would provide a worthwhile conversation partner for a series of studies for a church’s leadership team. While it is particularly written for those of us within the Church of England, its value is certainly not limited to that context.

In the first of the chapters, Paul discusses the meaning of the overused term ‘leader’, remarking upon the various biblical terms and roles that have become agglomerated under this single denomination. There has been a tendency to replace the concrete nouns and images of leadership that we encounter in the New Testament with a more abstract notion of leadership. He discusses the ‘triangular’ vision for leadership that the New Testament promotes, in which ‘both the leader and the community itself depend on the call of God for their self-understanding and their identity.’ The authority of the leader is a refracted authority, rather than their personal possession. Beyond this, the Christian leader is shaped by the profound ‘mutuality’ in ministry that exists between them and others in the Church, whether ‘clergy’ or ‘laity’.

The longest chapter of the book is a thoughtful exploration of some of the tensions and tendencies visible in twenty-first century evangelical identity, especially as they play out in the context of the Church of England. Paul explores the struggle that evangelicals, as members of a historically diverse movement accustomed to being either a dominant majority or embattled minority, have in occupying the position of a ‘significant but not dominant voice’. For an evangelical Anglican, one is necessarily in a close relationship with other groups within the church in a manner that provides a check upon our often instinctively tribal theologies. Paul appreciatively discusses Jon Kuhrt’s more dialectical discussion of evangelical identity, for which evangelicals seem to function more as an essential and often corrective voice in a larger conversation, without confusing their particular and necessary emphases within that conversation with an expression of God’s truth sufficient to function as a monologue.

Paul’s own definition of evangelicalism places its weight upon the role played by the norm of Scripture in testing all teachings, employing Stephen Neill’s Scripture principle: ‘Show us anything the Bible teaches that we are not teaching, and we will teach it; show us anything we are teaching that the Bible does not teach, and we will cut it out.’ The result is, over against the definition offered by the historian David Bebbington (conversionism, activism, biblicism, and crucicentrism), a primarily aspirational definition of evangelical identity, a target to strive towards or a principle to be faithful to, rather than a straightforward description of the actually existing phenomena.

The next chapter on mission observes the striking contrast between the pressure, sense of unwelcome duty, and guilt that so often attends our conversations about mission and the naturalness of mission as portrayed in the NT. There mission is often spoken of, less as a command, than as an organic development out from the Church’s own experience of God. The activist tendency in evangelicalism often causes us to neglect the Church’s own care and growth in maturity. The notion that the Church exists purely for the benefit of non-members can leave us uncertain as to what the purpose or benefit of becoming a member is.

Paul discusses the relationship between the dimensions of mission involving social justice, ecological, and the works of mercy with the dimensions of evangelization and discipleship that evangelicals more typically accent, arguing that they form the ‘vital context’ within which mission can occur in a meaningful manner. He explores three different models of mission—Robert Warren’s ‘Healthy Churches’ model, Mike Breen’s ‘Missional Communities’ model, and Thom Shultz’s ‘Four Acts of Love’ model—suggesting that each can provide illuminating perspectives upon a good approach.

The fourth chapter discusses the evangelical relationship to Scripture. This relationship has changed in various ways over recent years. Personal Bible reading is less common, and corporate reading of Scripture has declined in evangelical circles (while there remains lots of scriptural reading in traditional Anglican congregations). Digital access to the Bible has also had a fragmenting effect upon our Bible reading. However, alongside these developments there has been a rising appreciation of the importance of the discipline of hermeneutics and the task played by interpretation. Our engagement with Scripture is currently being challenged by progressivism, the elevation of tradition and reason to parity with Scripture, and by the hyper-democratizing impulse of contemporary culture.

The book concludes with a chapter on the challenge of engagement. The discontinuity brought about by conversion always threatens to become a disconnection. The discontinuity emphasized by evangelicalism has often produced disconnections from the academy and from church bodies. Evangelical Anglicans have had noteworthy successes as they have pursued a path of engagement in the Church of England and now occupy a number of key positions, both in the church and the academy, to the point of creating a ‘virtuous circle’. He notes the danger of converts gradually becoming so absorbed into church life that they lose contact and common ground with old non-Christian friends. The dangers of a church with non-porous boundaries and without the capacity to sustain a ‘fringe’ can be significant.

Paul’s booklet is, as should be obvious by now, a worthy springboard for fruitful and challenging conversations on a number of fronts. In each chapter there were perceptive insights and illuminating frameworks for understanding. I suspect that my understanding of leadership is accented slightly differently from his. However, Paul’s vision for Anglican evangelical identity is one with which I largely resonate. His aspirational definition of evangelical identity is one with which I more readily identify over Bebbington’s definition, which has always struck me as lopsided and limited, whether as a descriptive or as an ideal definition.

Nevertheless, while making the Scripture principle the central and determining factor of evangelical identity is helpful in some respects, I do not believe that it adequately accounts for the shape of actually existing evangelicalism, whether in the contemporary Church of England or in past ages. In part, this is because the same naïve posture towards interpretation that he addresses elsewhere in the booklet is all too often integral to evangelicalism’s Scripture principle.

Implicit in the Bebbington quadrilateral, for instance, is a posture that is generally relatively unreflectively brought to Scripture, and not merely derived from it. ‘Conversionism’ tends to treat the entire Scripture as if its purpose terminates narrowly on the individual convert; ‘activism’ can approach the Scripture as a text to be instrumentalized; ‘biblicism’ can detach the Scripture from reason, tradition, nature, and philosophy; ‘crucicentrism’ can impose a narrative straitjacket upon the text that dulls our awareness of resurrection, ascension, Pentecost, eschatology, and most of the Old Testament.

Although a strong Scripture principle is something to which we should aspire, I do not believe that the descriptive definitions of evangelicalism should be abandoned, as they help to clarify the particular form of (generally deficient) Scripture principle that evangelicals actually hold. That is, a central and profoundly powerful Christian principle very clumsily expressed, which is closer to identifying the distinctive character or genius of the evangelical movement. Perhaps this also opens up the possibility of us moving towards a more faithful form of Scriptural principle, even though it may take a very different form from that manifested in current evangelicalism.

Although it might be unfair to fault Paul for this, given the tight constraints he was working within, my principal disappointment with the booklet was that certain sections weren’t longer, perhaps especially the chapter on Scripture. I would have appreciated a more extensive treatment of the challenge of creating Scripture-saturated churches, the place of the sermon (a subject to which I know he has given a lot of thought), and other forms of scriptural engagement within the church’s life. However, the book has no pretensions to comprehensive presentation of its topics and such incomplete discussions can usefully invite the readers’ own elaboration of its subject matter. I warmly recommend this booklet and others in the Grove Books series.

Alastair Roberts (PhD, Durham University) writes in the areas of biblical theology and ethics, but frequently trespasses beyond these bounds. He participates in the weekly Mere Fidelity podcast, blogs at Alastair’s Adversaria, and tweets at @zugzwanged.
View all posts by Alastair Roberts →
This entry was posted in Christian Experience, Church History, Culture, Hermeneutics, My Reading, Reviews, Scripture, Society, Theological. Bookmark the permalink.