The Religious Magnetism of Bodies 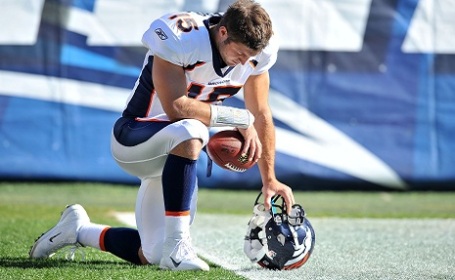 In a post on the ever-stimulating Sociological Images blog, Donovan O Schaefer comments on the charismatic character of Tebow’s body and the manner in which it has become ‘a sort of theological battleground for broader religious and cultural forces’. He writes:

My argument, however, is this: this profile of the divergent responses to the nexus of religious and cultural forces that converge on the image of Tebow’s body would be irrelevant and unread if Tim Tebow were a schlub–a homely, uninteresting, modest body, the kind of body that bus drivers drive past at the bus stop.  It is also an open question to me how we would be responding to Tebow if he were not a white body.  Those who want to challenge Tebow, to fight Tebow, to talk about Tebow are drawn in by the seductions of this image–the power of Tebow’s body — no less than those who are so ardently admiring of Tebow that criticism of him becomes a political rallying cry.  Tebow’s body is a magnetic body, a charismatic body.  It bends other bodies towards it–in both positive and critical ways.

This, then, is one of the main ways that religion happens — how identities, beliefs, and affects form and fuse: not through the advance of doctrine, but through the magnetism of religious bodies.

The ‘magnetism of religious bodies’ is a subject that should be of great interest to Christians. At the heart of our faith is not a mere set of ideas, a system of ethics, or even a teaching concerning salvation, but a particular body, a body upon which the destiny of the entire human race falls, a body crucified and a body risen, a body as sub-human refuse and a body glorified. Consequently, the manner in which our particular bodies can articulate this destiny is a matter of great significance.

I happen to think that the author of this piece is wrong: the magnetism of the religious body need not depend upon its imposing and physically impressive appearance. The magnetism of the body of Christ does not depend on its physical appearance – of which we know little beyond the fact that it wasn’t beautiful or desirable – but on the narrative of divine action that it manifests. Likewise, the body of Paul, torn by scars of beatings, stoning, physical deprivation, possibly suffering from blindness, and lacking imposing physical presence, becomes a focus of theological attention at various points, precisely for those reasons. Paul’s body becomes a ‘magnetic’ body as it is drawn into the field of Christ’s own body, through Baptism, Communion, and suffering.

This is not to deny the particular significance that a body such as Tebow’s can have in a culture such as ours, which worships the muscular and well-toned athletic body. When such a body submits itself to the magnetic field of Christ’s body, and starts to become cruciform, people will pay attention.

The idea that a particular narrative of the body is at the heart of religious life, and that it is from the magnetism of religious bodies that faith draws much of its power, is an important one, especially in the context of Western society, where our relationship with our bodies (eating, exercising, body modification, ageing, social ideals of physical appearance, clothing, etc.) and between bodies (of different sexes, appearances, races and ethnicities, ages, sexualities, etc.) is such a fraught one. In certain respects, the body of Christ can be viewed as a body shorn of distinctions, disgorged from the social order and brutalized beyond recognition in the crucifixion and transformed to be capable of appearing incognito and perhaps beyond a single determinate description in the resurrection. It is a body that voids itself and a body that invites all to write themselves into it. The Christian faith is committed to a narrative of the body, a counter-narrative to many of the contemporary narratives that dominate popular consciousness. It is worth reflecting on how this narrative shapes our relationships with our own bodies. How does the magnetism of Christ’s body draw our own bodies into its field?