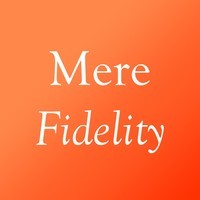 In this week’s Mere Fidelity podcast Derek Rishmawy, Andrew Wilson, Matt Lee Anderson, and I discuss the doctrine of divine accommodation and its immense importance within several contemporary debates, from discussions of the Bible and science, to the morality of God’s actions in the Old and New Testaments, to the applicability of various scriptural teachings, to the dangers of certain forms of apophatic theology, to the concept of cultural relevance and contextualization. Early in the podcast, Derek reads a quotation from Herman Bavinck’s Reformed Dogmatics Vol. 2: God and Creation, which encapsulates this doctrine forcefully and succinctly:

1. All our knowledge of God is from and through God, grounded in his revelation, that is, in objective reason.

2. In order to convey the knowledge of him to his creatures, God has to come down to the level of his creatures and accommodate himself to their powers of comprehension.

3. The possibility of this condescension cannot be denied since it is given with creation, this is, with the existence of finite being.

4. Our knowledge of God is always only analogical in character, that is, shaped by analogy to what can be discerned of God in his creatures, having as its object not God in himself in his knowable [sic.] essence, but God in his revelation, his relation to us, in the things that pertain to his natural, in his habitual disposition to his creatures. Accordingly, this knowledge is only a finite image, a faint likeness and creaturely impression of the perfect knowledge that God has of himself.

5. Finally, our knowledge of God is nevertheless true, pure, and trustworthy because it has for its foundation God’s self-consciousness, its archetype, and his self-revelation in the cosmos.

Hope that you enjoy the podcast and, as usual, leave your comments beneath this post or, even better, beneath the post on Mere Orthodoxy. We’ll do our best to answer any questions or engage with any thoughts that you might have.

Alastair Roberts (PhD, Durham University) writes in the areas of biblical theology and ethics, but frequently trespasses beyond these bounds. He participates in the weekly Mere Fidelity podcast, blogs at Alastair’s Adversaria, and tweets at @zugzwanged.
View all posts by Alastair Roberts →
This entry was posted in Doctrine of God, Podcasts, Revelation, Scripture, Theological. Bookmark the permalink.

8 Responses to Podcast: On Divine Accommodation