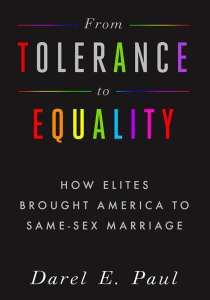 Darel Paul has written a thought-provoking new book, From Tolerance to Equality: How Elites Brought America to Same-Sex Marriage. I reviewed it here.

Marriages between two persons of the same sex represent the dislodging of the gendered hierarchy in marriages between men and women. Same-sex marriages are less a shared commitment to the demands of a natural institution ordered toward the bearing and raising of children, than they are a potent symbol of individual autonomy, self-realization, and expression. When marriage isn’t a male-and-female reality, gender stereotypes associated with parenting and labor can be undermined. Indeed, for these and other reasons, in many quarters elite opinion swiftly moved to present same-sex marriages as the ideal, not just an exception to be tolerated.

Paul suggests that perhaps one of the greatest factors informing elite support for same-sex marriage is their own low fertility. Through his analysis of the data, he reveals that fertility is “the fulcrum around which family models turn” (109). The more children a couple have, the less likely they are to be sexually progressive. Conversely, by far the highest support for the normalization of same-sex relations is found in those groups with the lowest fertility, for whom sex detached from reproduction is most normalized.

Alastair Roberts (PhD, Durham University) writes in the areas of biblical theology and ethics, but frequently trespasses beyond these bounds. He participates in the weekly Mere Fidelity podcast, blogs at Alastair’s Adversaria, and tweets at @zugzwanged.
View all posts by Alastair Roberts →
This entry was posted in Culture, Economics, Guest Post, My Reading, Reviews, Sex and Sexuality, Society. Bookmark the permalink.